This past week, we asked you to identify how many linen and linen-blend yarns we currently have for sale. The answer was, of course, four! Four lovely linen yarns, each with its own distinct fabulosity. There’s Claudia Handpainted Drama, a traditional wetspun sportweight linen that knits equally well to firm or loose gauges. At the opposite end of the spectrum, Madelinetosh’s Dandelion yarn blends 10% linen with their popular TML base yarn for a more heathered, linen look with the wooly feel everyone loves. 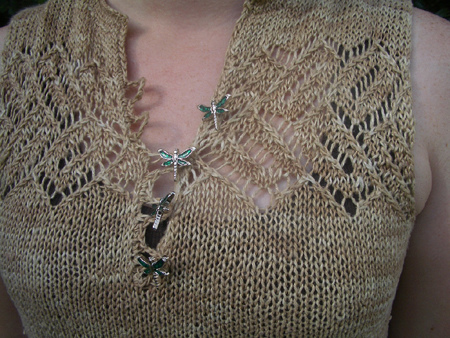 It’s no secret that I love linen knits. Our love affair began during the 2008 Ravellenic Games (formerly known as the Ravelympics) when I chose for my project the Versailles Shell, a tank I hoped would be perfect for wearing during hot Georgia summers. The yarn? Claudia Handpainted Drama (formerly known as, simply, Linen). And let me just be honest – I wasn’t all that excited about it. In the hank, the yarn seemed an awful lot like limp twine, and it was hard to see how this wasn’t going to be hard on my hands and awful to wear.

Never since have I been so wrong about a yarn, perhaps in part because after this experience, I adopted a firm policy of trying a yarn before judging it in its hank.

At a tight gauge, linen can be a little hard on the hands – similar to cotton – but not too, and the finished fabric is the most wonderful, cool, soft thing you could hope to wear. Linen loves abuse; it gets better when you wash it, when you dry it, when you leave it crumpled in a ball in the corner. In short, linen is the perfect thing for my busy summers, and I’ve got a new Versailles on the needles right now as this one now lives at the shop.

Handmaiden Flaxen is another favorite, a slubby blend of silk and linen that makes for stunning open and lacework projects like the Kowloon Cardigan. And then there is Shibui Knits Linen, a linen unlike any others – a laceweight, chain-plied linen that is at once soft and breezy and the linen that might just convince you, once and for all, to add a bit more linen to your stash. 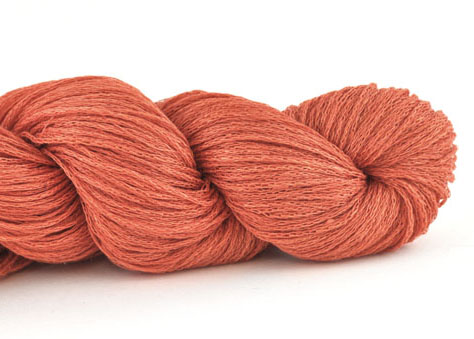 Everyone who submitted the correct answer (four!) has been credited and e-mailed to confirm. If you did not receive an e-mail and believe you should have, please let us know and we’ll take care of you. Make sure to check our Twitter for this week’s question!

This site uses Akismet to reduce spam. Learn how your comment data is processed.